help.sitevision.se always refers to the latest version of Sitevision

In Administration mode, you will find some of the settings that were previously found under Properties on SiteVision Server. Settings and monitoring have been modernised and improved. Administration mode includes a common event log for system events, logs, settings for clustered environments, webdav, jmx, and you can test the server's write speed.

You can find settings for the cluster by using the address <website address >/admin/cluster. You can view CPU, memory and disk usage per cluster node and manage the cluster; see system events for all cluster nodes; make backups; perform searches in Cassandra; download JMX information and get thread dumps. 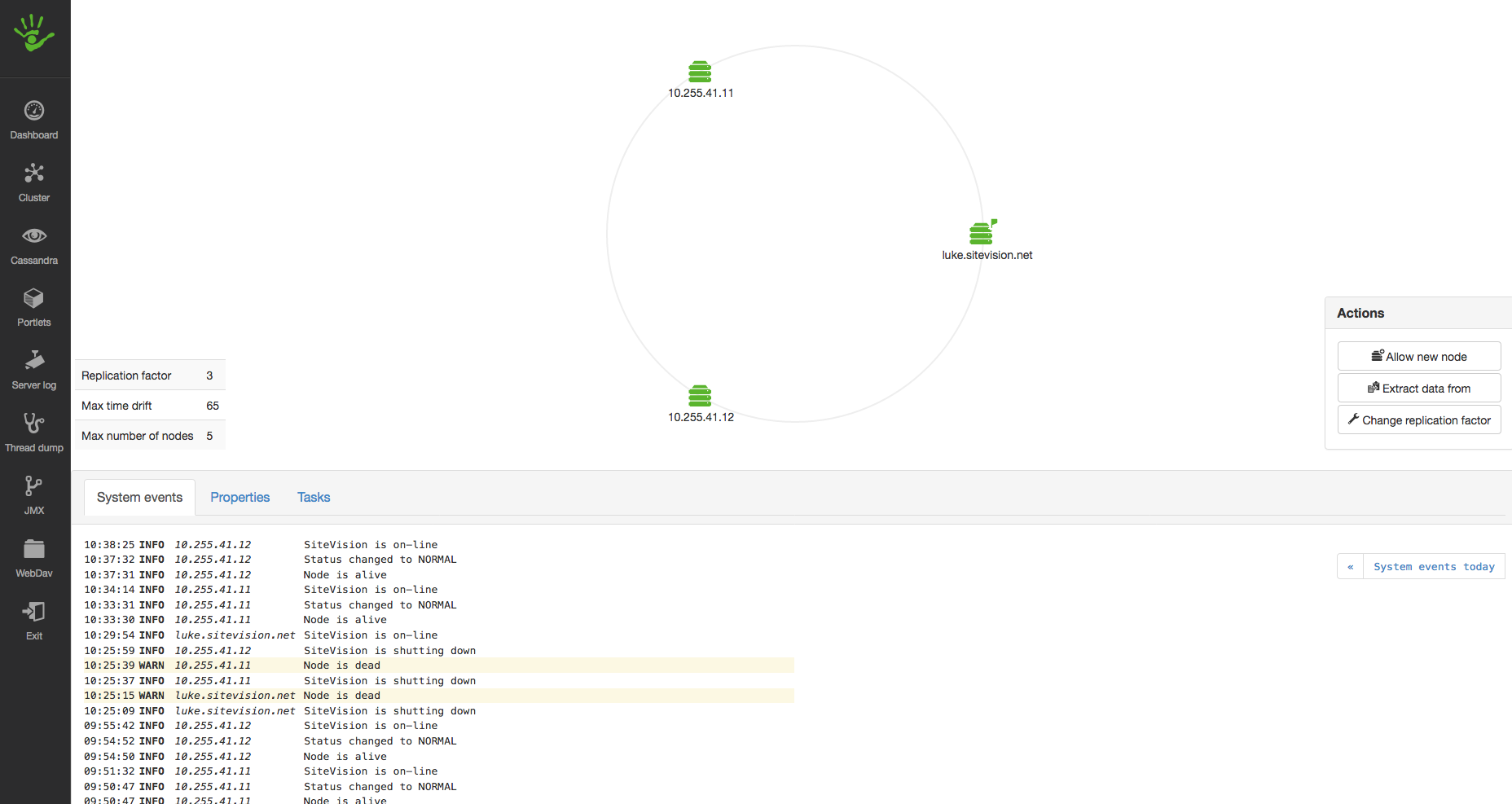 Here you can see all nodes in the SiteVision cluster. The node that you are logged in to is marked with a flag and will be referenced as the local node. Should a node be down or if you cannot access it from the local node for some other reason, it will be marked with a red X. Even if you only have one server, it will appear here.

Information to the left

How many copies of data are available in the cluster. Must match the number of nodes

The difference in MS between the nodes' system clocks. Should be as small as possible (use NTP on the cluster nodes) and never exceed 500 ms

How many nodes you can have in your cluster. Determined by your license

Allows you to add a new node to the cluster by opening a registration window. You must specify the node's IP address (must match the new node's listen_address). The window is open for 5 minutes.

During the registration process, the replication factor will be one higher than the number of nodes to prepare the cluster for the new node. The following must apply in order for it to be possible to add a new node;

Retrieves data from a cluster into a new stand-alone node. Like running bootstrap to a new node without being added to the cluster. After this operation, the entire database is replaced with data from backup from the seed node.

For this function to work, the following must apply;

This function can be used to periodically retrieve data from a production cluster to a test instance. Note, however, that the function is relatively "heavy" for the node you are retrieving data from.

Note that this replaces ALL data on the local node — not just a single website. Whole database replaced.

During an upgrade, this is interesting to get information about what is happening. What scripts are running, when they are done, how many are left. Displayed here are things that are essential when you add new nodes, shut down, lose contact, and run scripts. You also get information when you start a full indexing (may cause the node to be perceived as "slow")

Here you can switch between days.

Mirroring the most important system properties of Sitevision as well as any changes in custom/conf/sitevision.properties. It is possible to change a value by clicking on it in the list. You can also delete a value by clicking the "X on the right" when you have the mouse cursor in the list (not available for all properties). If you want to add a system property, this is done with the X at the top right.

A change of system properties usually requires a reboot to take effect.

Here are the background jobs that SiteVision runs, those that were formerly in the schedule manager. For example, search statistics, availability reports, link checks. 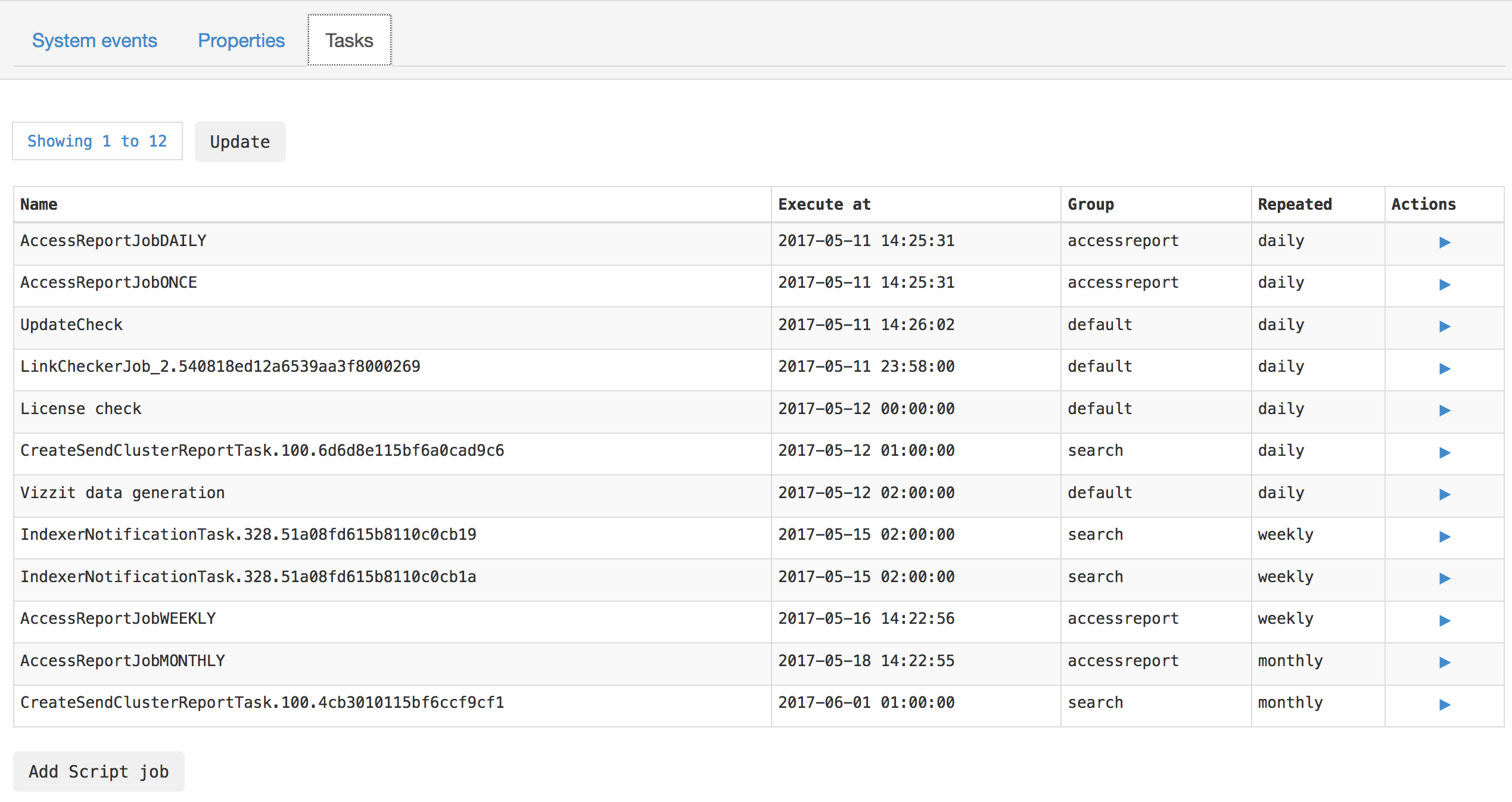 Here you can also add script jobs to run at certain times. You have access to SiteVision’s Public API and can create various jobs such as clearing news archives.

Script jobs are written in Server-Side JavaScript, just as in a Script module.

SiteVisionUtils is available directly in the context and should not be declared manually.

Use the pre-declared sitevisionUtils variable directly to retrieve other auxiliary classes (Utils) from the API. 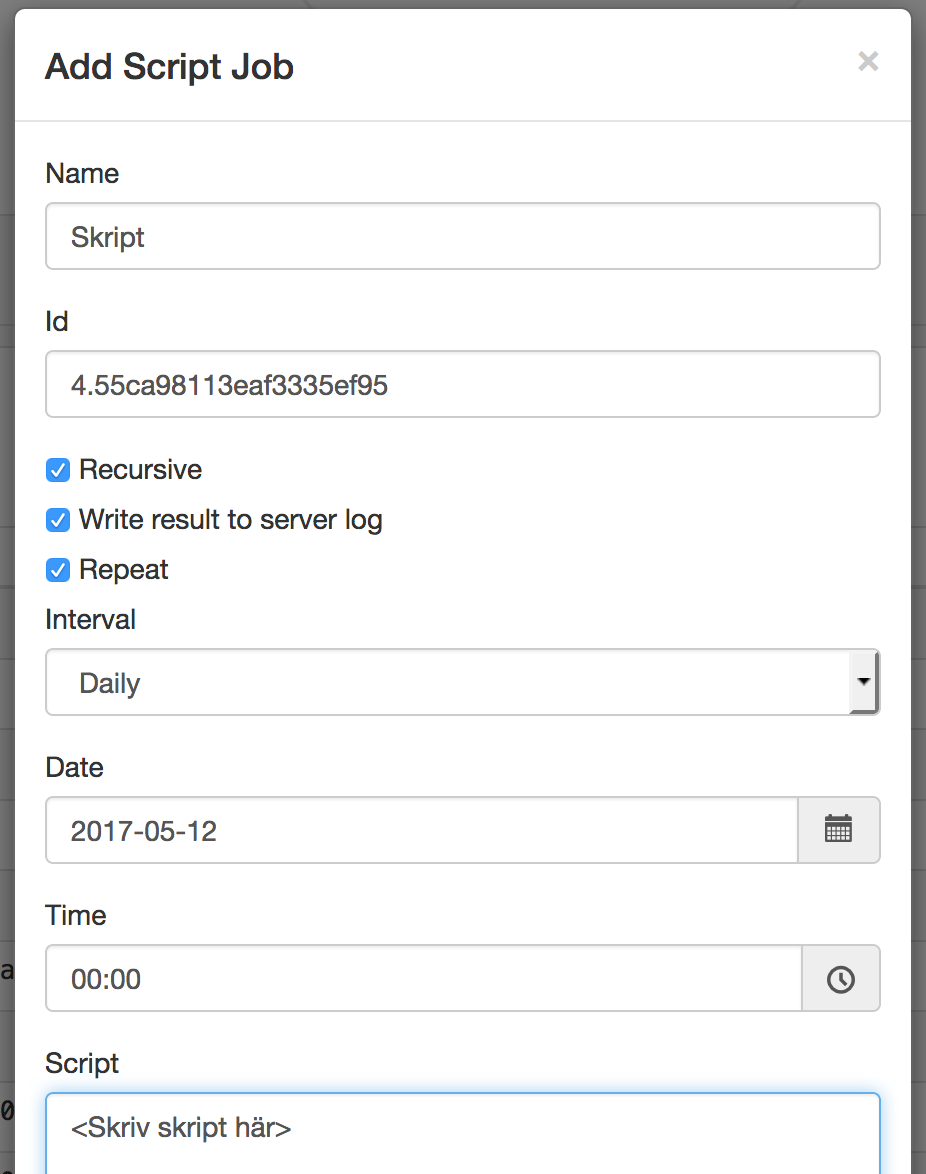 Further information for developers (English only)

In the script SiteVision’s public API is available if a start node is selected, see Available elements

You will not access the setting if the site is located in SiteVision Cloud.

Print page
Did the information help you?